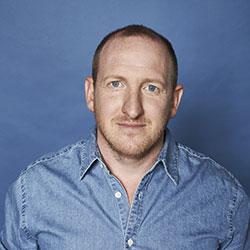 Neil Laybourn, founder of This Can Happen, never imagined that a chance meeting on Waterloo Bridge in London would change the course of his life.

Ten years ago Neil walked past Jonny Benjamin, sitting by the bridge, contemplating taking his own life. He stopped to talk to him and persuaded him to take a step back. The pair went their separate ways and 6 years later, a after a high profile social media search, dubbed the #FindMike campaign, which became a global news campaign that reached over 300 million people around the world, Jonny found the stranger who saved his life.

The pair has spent the last 4 years helping organisations from schools and universities to large corporates and everybody in-between in the UK and across the world eradicate the stigma of mental health and offer real support to workers facing challenges.

In 2014 Neil was recognised with a Pride of Britain award for his part in the #FindMike campaign and the following year Channel 4 told their amazing story in the award-winning Stranger on the Bridge documentary.

By now Neil was aware of his calling. He knew that he wanted to spread the word about mental health and suicide awareness and became a public speaker to private and public organisations.

In 2017 he qualified as a mental health first aid instructor with MHFA England and in the same year, he came up with the idea for This Can Happen – an innovative mental health conference tackling challenges in the workplace and bringing solutions and practical ideas to employers and leadership teams to help them look after their staff and colleagues in real-life, meaningful ways.

In the same year Neil co-founded the international mental health campaigning organisation You Alright Mate to bring business leaders, fellow campaigners and international support organisations together with a purpose to enhance the pair’s already accomplished campaigning in the UK and make a difference globally.

Most recently Neil co-founded the charity Beyond Shame Beyond Stigma to raise funds for preventative mental health and young people’s mental health solutions and in July he was awarded an Honorary Doctorate by Bristol University for work in mental health campaigning and advocacy work, alongside Jonny.